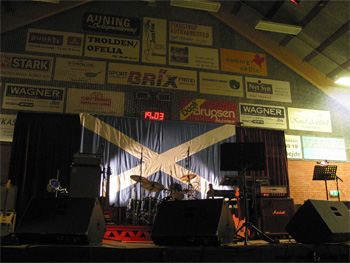 The stage
We were joined by a third friend that night, who has been a fan for a very long time. As we arrived at Pindstruphallen, we found there was nobody watching the wardrobe, so my friend was stuck as to where to store her backpack safely. Luckily, Jan (the organiser of the event) introduced himself so we asked him and he found a spot backstage.

The first thing we saw as we entered the hall - chairs! Rows and rows of bloody chairs! And long tables in the back. It's a village hall and that's what the atmosphere was like in the back, people having a beer and chatting. And they continued to do so during the concert until Jan went on stage to give them a piece of his mind during the interval, which shut them up nicely. Tak skal du have, Jan!

We wolfed down our portion of the lækker buffet to grab a spot in the middle of the second row. The stage is much smaller, so they couldn't put up much of a light show, and the sound mix was also more difficult to accomplish. Part of the sound had to come directly off the guitar amps and such. 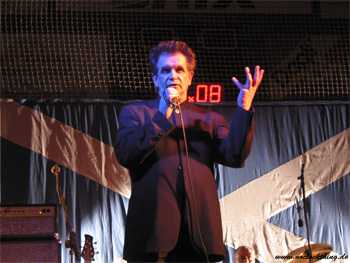 Donnie
The warm-up act was a local going solo with a guitar and playing songs everybody knew and everybody kept singing and clapping and laughing at his jokes. Except for me; my Danish isn't worth mentioning. So, I was rather stuck with the clapping bit.

One of the first things Donnie did was announce the football scores for Denmark and Scotland. It was still 0-0 for Scotland at half-time, which he cheekily announced as a victory! When one of my friends yelled up to the stage inquiring about the scores for Germany, he actually responded and apologised for not knowing.

Donnie wasn't laughing as much as he did the night before, and his introductions to the songs were also a bit shorter. I wonder if this change of mood was related to the crowd in the back who wouldn't even shut up during his announcements and quiet songs. Luckily, this situation was way different to the crowd in the front rows who kept going along, and you could see people dancing in the sidelines. I wasn't prepared yet to give up my center stage spot for that though, because I knew the sound was bound to be rubbish over there.

During the interval, we found that we were actually queuing up for the ladies' in front of the back stage door. Foss (keyboarder) inquired about the sound before he walked past us. Chaz was a bit too loud during the last song before the break, so we informed him about that. That's what you get when you don't have a front of house mixer to fine tune the sound during the concert, so thanks for asking, Foss!

We figured that our heads aren't any taller than the height of the monitors, so we decided to stand at the stage in front of Morph (right-hand guitarist) after the interval, making sure we wouldn't block the view for the bloke in the wheelchair, who was sitting on the left-hand side. Dancing, finally! And...

Standing virtually next to Donnie and singing along to Chì mi 'n Geamhradh, the first Gaelic song I ever learned. I never thought I'd see the day. A touching moment.

Singing along at the top of our lungs to Mo Chruinneag Bhòidheach. I go an octave higher, just so I can sing even louder. I had never sung as high in my entire life! My friends had written down the chorus on a piece of paper and we had practiced beforehand. Morph picks it up to see what we've got there. We hit the stage floor with our hands for the rhythm. My palms will still be slightly red the following morning. Foss is smiling at us. Fill-IÙ O RO HÙ O!

My friends bumming a bottle of water off Morph using hand signals.

Everybody else finally rising from their seats, and everybody on their feet during Only the Brave. Donnie keeps us singing the chorus extra long, and again and again and again. Clearly enjoying it. And they add an extra tonight: Auld Lang Syne. More singing and dancing, and then it's all over.

Well, not quite, since Jan thoughtfully provided enough concert posters for everybody to get signed. We first hung around close to the stage a bit, chatting and running into some of the musicians coming to pack up their instruments. I managed to grab one of Donnie's set lists. 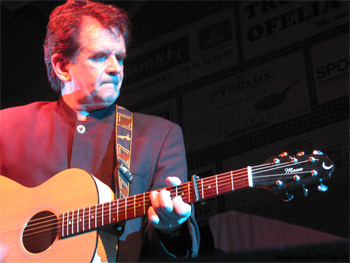 Donnie
We moved off away from the stage after not too long a while, since they turned up the music too loud. Probably to get everybody safely out of the way, so they could pack up the equipment.

We waited until most of the queue was gone until we lined up for the signing. I fulfilled my job as court photographer again. I didn't hang back as far as the night before, and after my friends had their stuff signed they asked if they could take a picture with him together, which they agreed to do after the last of the queue would be gone. Donnie knew I was with them and reached across the table to take my hand and we chatted a bit in Gaelic. And he remembered the friend who had joined us that night from many years before! He really has a memory for people that's nothing but amazing.

Of course, the first thing I had to tell him was that I had been dancing that night! We was very happy we went standing next to the stage and partying. He remarked that Pindstrup was very beautiful. I hadn't seen much of it myself though, so he asked if I had been busy driving which I confirmed. Luckily, my Gaelic was quite effortless that night.

While we waited for the photo opportunity, I stayed where I was and watched the proceedings. One of the women is learning Welsh and he asked if she was interested in Gaelic as well. She said it was too difficult for her, and he pointed out that I achieved fluency. Well, I don't really think so, at least not yet, but thanks for the compliment, Donnie!

After my final act as court photographer, Donnie walked up to me and took my hand to say goodbye, and I got my setlist and a concert poster signed. He then still had to go back to the stage in order to pack his guitar. On my way to the wardrobe I ran into the rest of the band and they took their leave.
Top of this page
Last edited: 5 April 2009 13:28:40