Day 4 - A Taste of Mackintosh 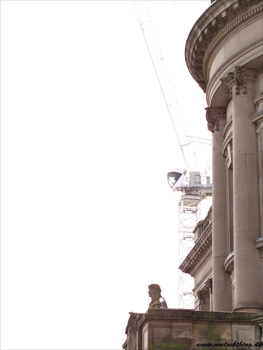 The Mitchell Library, Glasgow
After breakfast we lay out our plans for the day and walk towards the town. It is slow going, since there's always too much to see when you're in a new city. We walk down Sauchiehall Street and take a right turn towards the Mitchell Library, where we have a nice little chat with the guard. Our enjoyment of the building's façade is only slightly curbed by the omnipresent noise of the M8.

Glasgow School of Art
After a few more twists and turns, we climb a steep street and end up at the Glasgow School of Art, which was built by Charles Rennie Mackintosh, a local turn of the century architect. He did the interior design as well, together with his wife Margaret MacDonald. We sit down on a flight of stairs on the other side of the street and just enjoy the building. After a while, we decide to have a look inside. The plaques on the doors say In - Art and Out - School. We hit the gift shop next and gorge ourselves on the post cards.

Willow Tea Rooms, Sauchiehall Street, Glasgow
Since we're hungry for lunch, we decide to return later for the tour and go down Sauchiehall Street to have a look at the Willow Tea Rooms. The big room has been turned into a Jeweller's shop, but they reinstated the gallery and the comfort room. Our travel guide advised us to get a reservation, but we're lucky and there's a free table - right beside the cake display! One cake looks tastier than the next, and we feel our girths expanding just looking at them.

Willow Tea Rooms, Sauchiehall Street, Glasgow
The balustrade, ceiling, walls and chairs are all Mackintosh, and as we find later, even the bathroom doors have little tiny blue glass panes in them. And when I say blue I mean blue. There are skylights set in the ceiling all around, so everybody can enjoy the sunlight. The space is pretty cramped and we're amazed how the waitresses manage not to bump into anything! We enjoy a salad lunch before we hit the cake and tea. The piece I choose turns out to be layered short bread, fudge, and milk chocolate. Pure lethal bliss! 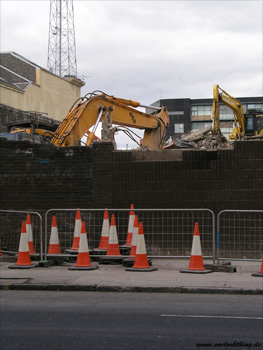 Renfrew Street, Glasgow
After lunch, we take a little random stroll before we go on the 4pm tour of the School of Art. While we're waiting, I notice a group of Portuguese who are thrilled to run into somebody who speaks their language in Glasgow of all places! Our guide arrives, and even after having been asked to slow down she talks pretty fast, so I can just barely get what she's saying.

Douglas Street, Glasgow
The first room we visit is a high-ceilinged studio space around the top of the staircase, with natural light filtering through the roof. It has square heating vents in the ceiling, and you can see a Japanese influence in their design. There's little carved details on the roof beams, like you find on any piece of wood designed by Mackintosh. The school was built in two steps, because Mackintosh exceeded his budget and it took them some years to raise the remaining funds.

In the new wing, the staircases are built of concrete rather than wood. Only part of the concrete is whitewashed, so the walls are partitioned in a wavy shape that runs alongside the stairs. There are coloured tiles set into the walls; no two arrangements are the same. The higher we climb, the lower the rooms get, until we reach the crypt in the attic. It feels like going down instead of up. Mackintosh was a master of playing with light and shadow.

Finally, we reach the library with the famous three storey windows. The room has dark wooden structures reaching down from the ceiling, and it is full of carvings, each of them different from the other. The intention was to make the room feel like a forest, and it succeeds very well. We actually contemplate hiding and letting them lock us in - too bad there isn't a bathroom attached! Also, it is not permitted to take pictures.

Bilingual signs at Queen Street Station, Glasgow
After a second round through the gift shop, we walk down to George Square, which is situated between Queen Street Railway Station and the City Chambers. We sit down on a bench for an hour and bask in the afternoon sunlight, until the sun starts to pass behind the buildings around 7pm. I go to inspect the bathrooms at the station and I notice the bilingual sign. It's the station that services the Highland lines, so I guess that's why they went to the trouble of adding the Gaelic. You don't normally see bilingual signs around Glasgow, not even English - Scots.

The Corinthian, Ingram Street, Glasgow
As we decide to head back, we first take a little detour past the Glasgow City Chambers to take some pictures from outside. We then walk to Ingram Street and have a not so quick peek at the Corinthian, before we pass by the Museum of Modern Art and the Central Station. There is so much to see and snap pictures of that it takes us two hours to make our way home!

Glasgow Central Station
After a quick change we're off to Mother India for an excellent albeit far too late and huge supper. I accidentally order an extra bowl of rice for my friend, which turns out to be fortunate, since she actually eats it. The waitress thanks us every time she brings some food or clears part of the table. This is a level of friendliness we're not accustomed to, and I totally enjoy it.