Bødkerhuset
We were already delighted as we reached our B&B, an old farmhouse sitting in the sun. Our bedroom was under the roof and we had to watch our heads for the wooden beams. After settling in and stretching our legs, we made our way to Portalen. We parked in the back and after walking around the whole building and starting to wonder if they have a secret magic door where you need to "say friend and enter" or something similarly confusing, we found the pedestrian ramp leading up to the main entrance, which is above ground level. Row 4 on our tickets turned out to be table 4, in the front row, smack in the middle. Aren't we lucky! The location is small enough for there to be no barriers. We walked up to the stage and took a peek at the setlist before the start of the concert. 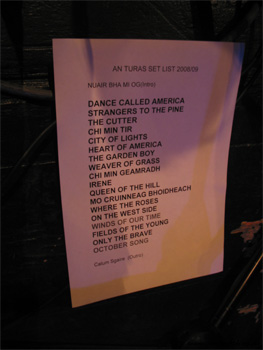 Setlist
Portalen is a theatre, and they made the most of it with an amazing light show. Colours you wouldn't believe. The sound was also excellent. I had never seen Donnie live before, but from the recordings I have I always thought that the band found their sound with the Heart of America album, and they really did. Everything meshed together perfectly that night.

Donnie was in an excellent mood, laughing and smiling and very chatty. He introduced all the songs at length. He is very witty with a subtle, pointed intellectual humour. I came there expecting to smile a lot and to have a good time and to be singing along, but not to be bursting my sides laughing as well. Loved it!

He told us he'd been on the phone with Malcolm Jones who had been back home from hospital. He dedicated Dance Called America and Only the Brave to him. He got a big round of well-earned applause for that.

Most of all I remember feeling chained to that bloody chair. How does one dance sitting down in a theatre chair? Luckily, somebody dared to misbehave and dance in front of the stage during Only the Brave, and I went along, finally. Even if it was only for one last song and then it was all over.

Donnie
After the end of the concert, we hung around to see if we would get a chance to talk to Donnie and get a book or two signed. The band came out to pack their instruments themselves, and there he was. We had agreed that my friend's turn would be first, so I hung back and my job as court photographer began in earnest. There weren't a lot of people hanging around anymore, because there was no planned signing, so he had a couple of minutes' time for everybody. And he actually remembered us from Portree last Summer!

Since he remembered me, he talked to me in Gaelic from the start, and he asked me how my Gaelic was coming along. We mostly chatted about that. He asked me if I knew that my Gaelic Teacher was a singer, which I do. I planned to tell him we actually sang Tillidh mi together in class once, but the opportunity passed me by. My grammar was nothing to write home about that night and I kept having to hunt for words. I bluffed it pretty well tough.

When he asked me about how I liked the concert I just told him how I felt about having to sit, and he promised that we'd be able to stand the following night. This was the same information we had, so that was me being very happy about getting confirmation!

We left by the side entrance and there was Chaz (left-hand guitarist) up on the elevated stage side entrance calling down to us and we chatted a bit, shouting back and forth. He was very happy to hear we came all the way from Germany and that we enjoyed ourselves very much, and he was looking forward to seeing us the following night.

Bits and Pieces of Conversation I Overheard

Chaz
Donnie had some very complimentary things to say about Bruce. He likes his solo stuff, and he thinks he is a good match for Runrig.

They talked about somebody who made a film about Sorley MacLean ('Hallaig: the Poetry and Landscape of Sorley MacLean'), Timothy Neat. He said he's quite a character. Once he was supposed to give a speech and instead of the expected subject matter he gave everybody a telling off and a piece of his mind. Here's some links related to the film: